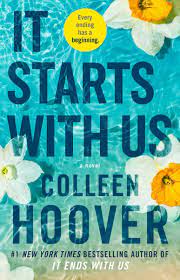 It Starts With Us is the sequel to It Ends With Us, both written by author Colleen Hoover. This book follows Lily Bloom as her story continues as a newly divorced mother. The book is set in present tense however what has fans excited about this book is the incorporation of Atlas’ perspective, which if you read It Ends With Us, was not present but was requested by many for Hoover’s newest story. Through this novel we, as readers, got to experience Lily’s life as she built it around herself, her past and present issues and her new experiences.

It Starts With Us was one of the most anticipated books of 2022, which is why I was so excited to read it. However after reading it I did not feel it was extraordinary. I rated it a 3 out of 5 stars due to that fact. It was not surprising, and even though I raced through it I was less and less eager to read it as I began to reach the end. There was a mediocre and almost lacking climax and there were no aspects that stood out to me. It was definitely a disappointment to It Ends With Us and it actually felt like there was no need for it. The book only developed Lily’s relationships more and summarized Ryle’s anger issues. However the upsides to this book were the romance and the relationships. Hoover gave us much more of Atlas and Lily, although we also saw how that conflicted with Ryle and Lily. There was drama there as well. The relationship with Lily and her daughter was more apparent, we got to see into Lily’s character more and witness more of her character growth in how much she is willing to put her daughter before everything. The relationships in this sequel were definitely more developed than they were in the first book, but this perhaps, was due to a base provided by the first book.

To conclude for me this book wasn’t good or bad. It was fine, but there was nothing distinctive about it, which was a little disappointing and that is why I awarded it 3 out of 5 stars. For me it is not a must read, it is a must recommend.