On the 9th October 2022, the Austrian presidential elections were held after four years, the last one being held in 2016. Although many predicted the reelection of Alexander Van Der Bellen, who has been the Austrian federal president for the past six years, the results of this year’s election have confirmed this. Van der Bellen started with certainty that he was confident of his victory and believes that he has made a positive impact on the Austrian economy, and will therefore gather as many, if not more, voters than in the last election. Stating his chances of winning were higher than the other candidates, as the others had to prove themselves worthy of the position, Van der Bellen claimed that he had already shown the Austrian citizens what he stood for, and his goals for the future.

After Sunday’s elections on the 9th October, Alexander van der Bellen, the former six year president, was reelected, and won with 56,69%, more than 50% of voters.

Van der Bellen stepped up against six other opponents, all running for the position of Austrian Federal President. Once again, no woman has stepped up as a candidate for this significant six-year position that will be held until 2028.

Walter Rosenkranz of the FPÖ who was a lawyer since 2019, was nominated by the FPO, and supported the ideas of the “Freiheitliche” Party of Austria.

Tassilo Valentin, another candidate who went up for the position, did not, as it was expected, choose to candidate as a member of the FPÖ, but instead went as an independent candidate. In an interview with the Krone Zeitung, he criticized the EU several times, which elicited skeptical reactions from many.

Michael Brunner of the MFG had a main focus in removing the Corona Pandemic measures, and got more than 50,000 votes from Vaccine deniers.

On the liberal side Dominik Wlansly, also known by his artist name Marco Pogo, was the youngest candidate to ever run for federal president in Austria, created the Bier Party, but the party was eliminated in 2020, when there were not enough votes for this party.

The results showed the following for each of the candidates. In first place came Alexander Van der Bellen, with 56,69% of the votes. Next, with a significantly less percentage of 17,68%, was Walter Rosenkranz. Dominik Wlazny came in third place, with 8,31%. Closely behind him in fourth place was Tassilo Wallentin, with 8,07%, and with 5,57% in fifth place was Gerald Grosz. The last two candidates, Micharl Brunner and Heinrich Staudinger, lost with 2,11% and 1,59%.

Elected for the second time, Alexander Van der Bellen has the position as the next six-year federal president. With a clear focus on the climate crisis, a sustainable future, and a successful start to a sustainable lifestyle in Austria, Van der Bellen’s ideas have proven to have a positive impact on the Austrian voters. The 78-year old, president since 2016, has developed many helpful and progressive ideas towards climate change, one of his main focuses. Although he is an independent candidate, not representing a specific party, Van der Bellen was the previous head of the Green Party in Austria, until he left in 2012 to work for the Austrian Parliament. 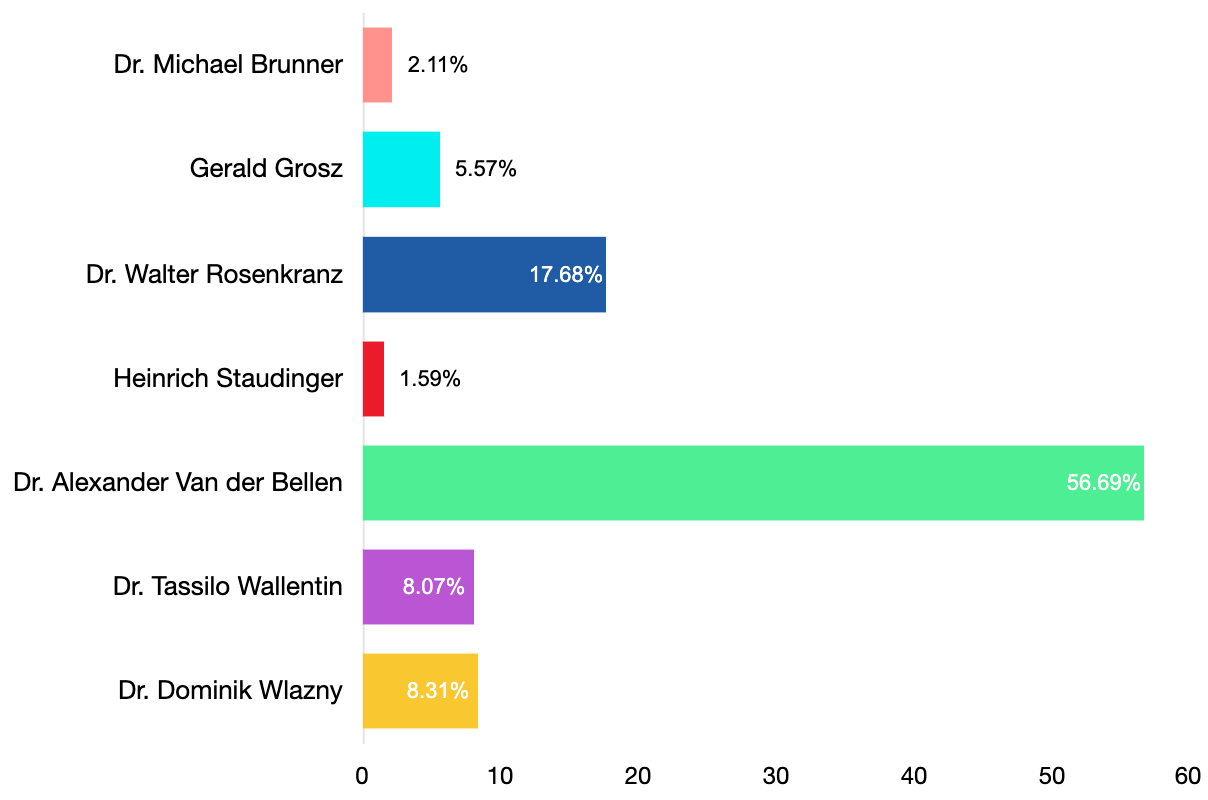 The current war between Russia and Ukraine has impacted Van der Bellen’s goals for the next year. In an interview with Klaus Webhofer, he stated that his respect for Putin was gone, and one of his goals for as long as possible was continuing the strict sanctions against Russia. Although some of the candidates have the opposite opinion, wanting to remove the sanctions, Van der Bellen believes it is the only way to support Ukraine.

Another focus of Van der Bellen, although not as important to him as the climate crisis or the Ukraine-Russia war, is to raise more money for diplomacy and to clarify allegations of corruption. This includes traveling for the Austrian embassy, and clarifying issues such as the Ibiza Affair that happened in 2019, and corruption allegations against the OVP that have been ongoing for some time now. He stated he is “against all types of corruption. All of these allegations should be clarified, that is no question.”